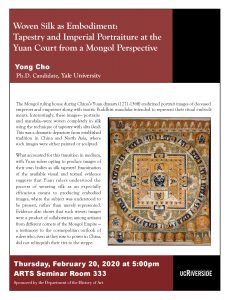 The Mongol ruling house during China’s Yuan dynasty (1271-1368) enshrined portrait images of deceased emperors and empresses along with tantric Buddhist mandalas intended to represent their ritual embodiments. Interestingly, these images— portraits and mandala—were woven completely in silk using the technique of tapestry with slits (kesi). This was a dramatic departure from established tradition in China and North Asia, where such images were either painted or sculpted.

What accounted for this transition in medium, with Yuan rulers opting to produce images of their own bodies as silk tapestry? Examination of the available visual and textual evidence suggests that Yuan rulers understood the process of weaving silk as an especially efficacious means to producing embodied images, where the subject was understood to be present, rather than merely represented. Evidence also shows that such woven images were a product of collaboration among artisans from different corners of the Mongol Empire —a testimony to the cosmopolitan outlook of rulers who, even as they rose to power in China, did not relinquish their ties to the steppe.