Looking at art with Malcolm Baker is always an adventure. This conference celebrates Distinguished Professor Emeritus Baker’s scholarship and his time at UCR. Baker is an eminent authority in the history of sculpture, especially in 18th-century Britain, France, and Germany. Within that field, he developed a keen interest in portraiture and the history of collecting and display. Professor Baker had an important career as a curator in the UK, first as Assistant Keeper of the Department of Art & Archaeology at the Royal Scottish Museum in Edinburgh, then as Keeper, Deputy Head of Research, and Head of the Medieval and Renaissance Galleries Project in the Victoria & Albert Museum in London. He taught at the Universities of York, Sussex, and at USC before joining UCR’s Department of the History of Art as Distinguished Professor. As chair of the Art History department at UCR he was a key figure in developing and consolidating its ties with the Huntington Library and Gardens and the Getty Museum and Research Institute. Professor Baker’s joy in front of works of art colors and informs his research as much as his teaching, and students love his classes. During the conference, we will look with friends and colleagues at some engaging objects to honor his career and his unique approach to art and its display.

Join us as we celebrate the career of Distinguished Professor Emeritus, Malcolm Baker. 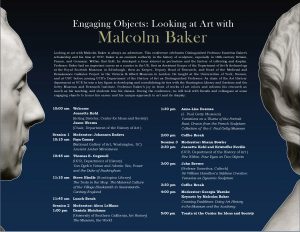 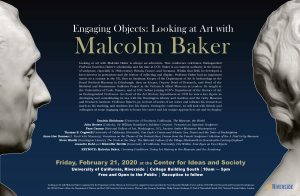