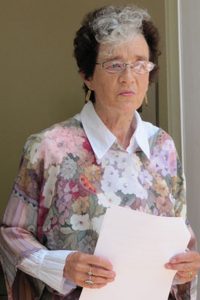 Professor Forster-Hahn has long been a pillar of the UCR arts community. After receiving her PhD from the University of Bonn in Germany, she came to the United States, working first in the Yale University Art Gallery and then at Stanford University, where she was both chief curator at the university museum and lecturer in the art department. After a year as a lecturer at UC Berkeley, she came to Riverside in 1975, and remained until her retirement in 2011, retiring as Distinguished Professor and a widely admired authority on art history from the later eighteenth to the twentieth centuries. In particular, her studies of Adolph Menzel and Max Beckmann are foundational.

Even after becoming a permanent member of the UCR faculty, Forster-Hahn developed her ties to the museum world. Notably, she curated an exhibition of the works of the important twentieth-century printmaker Käthe Kollwitz in the university art gallery in 1978 and, with graduate students, another on printmaking in France and Germany in the years before World War I. At the same time, she was a leader in the new field of the history of display, and developed a seminar on the history and ideology of the museum that was a touchstone for many of the department’s graduate students. She continues to pursue this theme in her current project on the Centennial Exhibition of 1906 in Berlin and its importance for the formation of modernism as a field of study.

Forster-Hahn’s dual commitments to teaching and to museum collections and the study of physical objects are evident in the new travel award. Following her insistent belief, expressed many times over the years, that there is no substitute for engagement with the real thing, the award allows students to study works in depth and on site, and to pursue archival and museological work far from home. Travel is not a narrow tool for thesis research, however. Forster-Hahn believes that it is also a way to become knowledgeable about the world and to situate the thesis project within the biggest possible cultural context, which must be experienced at first hand.

The Françoise Forster-Hahn Graduate Travel Award will be presented each spring quarter used to fund independent research traveling during the summer.

In addition to the Forster-Hahn award, the department offers the Barbara B. Brink Travel Award and the Richard G. Carrott Travel Award, which also support student research. We are grateful to have such strong support from those who have been part of our community.