Honoring the Paintings of the Past. Art history scholar selected to present research at the Getty Graduate Symposium 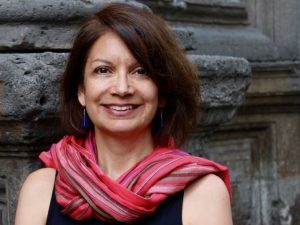 Cynthia Neri Lewis, Ph.D Candidate in UC Riverside’s Department of the History of Art, was selected as an emerging student to present her research at the second annual Getty Graduate Symposium. The symposium will be held Saturday, Feb. 1, 2020, at the J. Paul Getty Museum in Los Angeles.

“I’m excited to be interacting with other graduate students who are also in the midst of their writing,” Lewis said. “It’s a chance where we can be open-minded before coming to our conclusions. I’m interested to see how the conversations will go in terms of the type of feedback and questions I will get, particularly in regards to the decolonizing and indigenizing methods I have employed in this chapter of my dissertation.”

As part of the symposium, the Getty asks university art departments to nominate their most promising students to give a formal presentation on some aspect of their research. At UCR, Lewis was selected to present her research, “Native Painting as a Usable Past: the Index of American Design California Mission Project (1936-1942)” Through case studies and research, Lewis has demonstrated how the Index-created archive and federally-sponsored art “restorations” have influenced our contemporary understandings of both the “mission motifs” and the Native cultures that produced them.

“Before I entered UCR in the fall of 2016, I had already been studying the art of the California missions in general,” Lewis said. “I was working primarily with 18th-century oil paintings that had been sent to the missions from workshops in Mexico City.”

When Lewis started her research with Jason Weems, Professor of Art History, she oriented her work in a different lens. Weems encouraged her to think more about the federal art projects during the time of the New Deal (1933-1939), such as the Index of American Design.

“I started to think more about something I had seen in the San Gabriel Mission, where I’m a board member of the museum,” Lewis said. “One item was a hand-painted watercolor rendering of the state of California and all the missions that were visited by the Index. They sought to define the nation’s cultural identity and provide inspiration for modern art that would be distinctly American. That they would find the California missions to be one of the most promising sources for a national art during the New Deal era, given the United States’ conflicted relationship with its Spanish, Mexican and Native American roots, is the unique situation I am investigating.”

“This is a real look at public policy at the time and what it means for us today,” said Millagros Peña, Professor Sociology and Ethnic Studies, and the Dean of the College of Humanities, Arts, and Social Sciences. “Art historians help us think about decisions made by the government to invest in art documentation and recovery, which shows the complicated and critical understanding of who we are as a nation and our relationships with native people. In many ways, they reach into the past, help us self-reflect, and tap into our inner conscience in order to move forward in the future.”

As a space for innovative and groundbreaking research, the Getty Research Institute moved forward with it’s philosophy to engage with exemplary scholars in art history and graduate level research. The initiative was to create a high-level symposium, hosted by the Getty, that would highlight the work that was taking place in art history departments and programs across the state of California. The conversation included leaders from various UC’s with the intent to give visibility not only to scholars, but the departments and programs they come from as well.

“For our department, this gives us the chance to display the kinds of research opportunities, types of mentorships, and quality of education we offer,” Weems said. “ We can demonstrate the way in which our faculty and art programs are contributing to the study of art history, locally, nationally, and internationally. This is a tremendous opportunity for us because out of the eight departments in California that offer the Ph.D., ours is certainly the youngest out of all the programs.”

Camilla Querin, last year’s candidate, felt honored to represent the art history department and UC Riverside at the first Getty Graduate Symposium. She notes that this was an excellent opportunity to present her research in such an important venue for the study and discussion of art.

“When I participated, I had just defended my prospectus, therefore it was a great way to present my project to a larger public of scholars and test my argument, its appeal, as well as my presentation skills,” Querin said. “The fact that UCR was selected as one of the universities to participate in the Getty Graduate Symposium positions the art history department within a larger academic network, which can foster positive exchanges and future collaborations.”