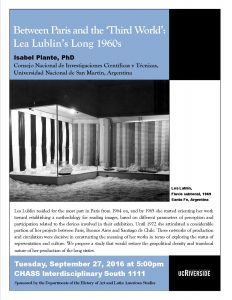 Between Paris and the ‘Third World’: Lea Lublin’s Long 1960s

Lea Lublin resided for the most part in Paris from 1964 on, and by 1965 she started orienting her work toward establishing a methodology for reading images, based on different parameters of perception and participation related to the devices involved in their exhibition. Until 1972 she articulated a considerable portion of her projects between Paris, Buenos Aires and Santiago de Chile. These networks of production and circulation were decisive in constructing the meaning of her works in terms of exploring the status of representation and culture. We propose a study that would restore the geopolitical density and translocal nature of her production of the long sixties.