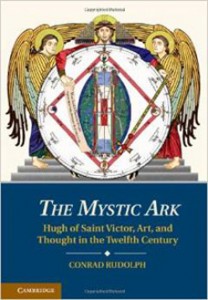 Conrad Rudolph’s recent book, The Mystic Ark: Hugh of Saint Victor, Art, and Thought in the Twelfth Century (Cambridge University Press, Cambridge and New York, 2014), has won the 2014-2015 Emory Elliott Book Award from the UCR Center for Ideas and Society.

In medieval written sources, works of art are not often referred to, let alone described in any detail. When they are mentioned, it is seldom with more than a word or phrase, at the most a sentence. Almost completely ignored by art historians because of the immense difficulty of its text, Hugh of Saint Victor’s Mystic Ark (c.1125-1130) is a forty-two page description of the most complex individual work of figural art of the Middle Ages, a painting also known as The Mystic Ark. Depicting all time, all space, all matter, all human history, and all spiritual striving, this highly polemical image deals with a series of cultural issues crucial in the education of society’s elite during one of the great periods of intellectual change in Western history. Meant to be copied by others, it is among the most unusual sources we have for an understanding of medieval artistic culture.