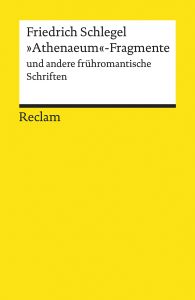 Friedrich Schlegel’s critical writings on literature and art played a central role in the emergence of European romanticism as an intellectual movement. The book assembles and annotates the most important of Schlegel’s texts, prior to his conservative turn in 1808. In addition to the texts, which the edition presents according to their first prints (undoing modifications and modernizations previous editions have introduced), the volume also provides extensive explanations of Schlegel’s language and the many references he makes. The epilogue sheds light on the various complexities of Schlegel’s thinking and, following the concept of the Reclam Universal Library, renders it accessible to a wider audience.