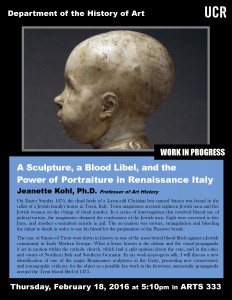 A Sculpture, a Blood Libel, and the Power of Portraiture in Renaissance Italy
Jeanette Kohl, Ph.D. Professor of Art History

On Easter Sunday 1475, the dead body of a 2-year-old Christian boy named Simon was found in the cellar of a Jewish family’s house in Trent, Italy. Town magistrates arrested eighteen Jewish men and five Jewish women on the charge of ritual murder. In a series of interrogations that involved liberal use of judicial torture, the magistrates obtained the confessions of the Jewish men. Eight were executed in late June, and another committed suicide in jail. The accusation was torture, strangulation and bleeding the infant to death in order to use his blood for the preparation of the Passover bread.

The case of Simon of Trent went down in history as one of the most brutal blood libels against a Jewish community in Early Modern Europe. What is lesser known is the debate and the visual propaganda it set in motion within the catholic church, which had a split opinion about the case, and in the cities and courts of Northern Italy and Southern Germany. In my work-in-progress talk, I will discuss a new identification of one of the major Renaissance sculptures at the Getty, presenting new conservatory and iconographic evidence for the object as a possible key work in the ferocious, anti-semitic propaganda around the Trent blood libel of 1475.