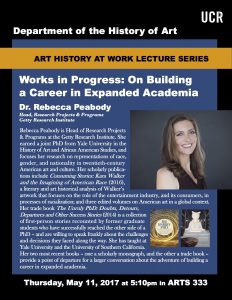 On Building a Career in Expanded Academia

Rebecca Peabody is Head of Research Projects & Programs at the Getty Research Institute. She earned a joint PhD from Yale University in the History of Art and African American Studies, and focuses her research on representations of race, gender, and nationality in twentieth-century American art and culture. Her scholarly publications include Consuming Stories: Kara Walker and the Imagining of American Race (2016), a literary and art historical analysis of Walker’s artwork that focuses on the role of the entertainment industry, and its consumers, in processes of racialization; and three edited volumes on American art in a global context. Her trade book The Unruly PhD: Doubts, Detours, Departures and Other Success Stories (2014) is a collection of first-person stories recounted by former graduate students who have successfully reached the other side of a PhD – and are willing to speak frankly about the challenges and decisions they faced along the way. She has taught at Yale University and the University of Southern California. Her two most recent books – one a scholarly monograph, and the other a trade book – provide a point of departure for a larger conversation about the adventure of building a career in expanded academia.