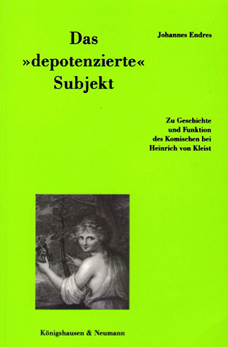 Kleist scholars tend to imagine the author as the paradigmatic exponent of a tragic mind. The shadows of his tragedies in life and literature seem too heavy and gloomy to leave room for comic tendencies. Although Kleist’s two comedies have always been acknowledged as true highlights in the history of the genre, his comic “strategies” – as well as their precedents from Lessing to Freud – have mostly been ignored. However, with such strategies in mind, the author’s situation appears as one in which the demands of an idealist worldview provoke a retreat to the limited and reduced formats of comedy. Kleist’s massive ›struggle with Schiller‹ – his predominant role model and antipode – is here reexamined in the light of a general struggle to avoid tragic inevitabilities.