King Sejong the Great and the Cultural History of Weather, Religion, and Wealth in Early Chosŏn Korea 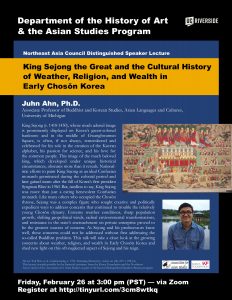 King Sejong (r. 1418-1450), whose much adored image is prominently displayed on Korea’s green-colored banknote and in the middle of Gwanghwamun Square, is often, if not always, remembered and celebrated for his role in the creation of the Korean alphabet, his passion for science, and his love for the common people. This image of the much beloved king, which developed under unique historical circumstances, obscures more than it reveals. Nationalistic efforts to paint King Sejong as an ideal Confucian monarch germinated during the colonial period and later gained steam after the fall of Korea’s first president Syngman Rhee in 1960. But, needless to say, King Sejong was more than just a caring benevolent Confucian monarch. Like many others who occupied the Chosŏn throne, Sejong was a complex figure who sought creative and politically expedient ways to address concerns that continued to trouble the relatively young Chosŏn dynasty. Extreme weather conditions, sharp population growth, shifting geopolitical winds, radical environmental transformations, and resistance to the state’s encroachment on private enterprise proved to be the greatest sources of concern. As Sejong and his predecessors knew well, these concerns could not be addressed without first addressing the so-called Buddhist problem. This talk will take a close look at the growing concerns about weather, religion, and wealth in Early Chosŏn Korea and shed new light on this oft-neglected aspect of Sejong and his reign.