Jason Weems Wins the John E. Miller Prize for Best Article with Holding the Soil: A Note on the Conservation of Midwesternness. 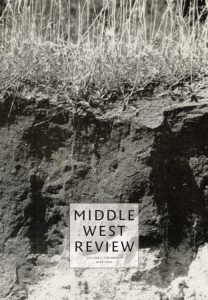 With great pleasure, the John E. Miller Prize Committee announces the winner of the 2020 prize for best article or essay to appear in the journal Middle West Review during the 2020 calendar year. Narrowing down the field of contenders to one top choice was daunting, given the high quality of scholarship and intriguing arguments present in all the articles under consideration. Jason Weems’ contribution, “Holding the Soil: A Note on the Conservation of Midwesternness,” went beyond those parameters, however. Weems, an art historian, employs innovative sources to arrive at a nuanced analysis about the widespread notion of midwestern identity as being rooted in the soil. Weems employs the most common depictions of midwestern landscapes in the 19th century, plat books, to identify midwestern identity of the time as resting on widespread availability of land rather than on the soil itself. Weems posits this as an economic relationship in which short-term exploitation of the soil was a far more typical experience of Midwesterners than long-term attachment. This “frontier mentality,” as Weems describes it, lasted only as long as the frontier itself. Subsequent generations of Midwesterners looked upon the landscape with different eyes. Weems argues that “it is probably no coincidence that Midwesterners became aware of the eroding status of their landscape in the same moment that they also saw the need to reorient regional identity.” (p. 132) The signature Midwestern trait of rootedness to the soil, Weems explains, came from second-generation residents who abandoned their frontier mentality – a horizontal orientation – for a deeper, vertical rootedness in place. Weems contrasts the horizontal plat book images, which appeal to the eye but also to the economic value of the land, with vertical photographs of the soil taken in the 1930s, showing soil depth and health, agricultural potential, but also fragility.  The John E. Miller Prize Committee deemed Weems’ analysis a substantial contribution to the historical understanding of midwestern identity formation and proudly bestows the 2020 Prize on Jason Weems’ Fall 2020 article, “Holding the Soil.”

The Miller prize is named for the long-time South Dakota State University history professor John E. Miller, who died unexpectedly in May 2020. Miller was always a strong supporter of Middle West Review and the Midwestern History Association. Miller, a Midwesterner with roots in Illinois, Minnesota, Kansas, and Missouri, Miller was the author of several books and many articles on Midwestern history.