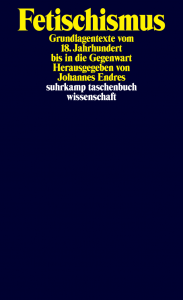 This volume brings together key contributions from the history of fetishism as a cultural practice, discourse and concept. Texts gathered here stem from a variety of fields and disciplines, including ethnography, anthropology, religious history, sociology, the critique of commodification and consumerism, psychoanalysis, gender studies, aesthetics, semiotics and epistemology. These texts, and their selection and presentation in this book, are concerned with a number of questions, which are crucial to the history of fetishism since the 18th century up to the present: Which forces regulate peoples’ relationships to their favorite things? Does the veneration of a piece of clothing repeat an archaic disposition from a remote religious past? Is the commodity fetish a descendant of the idols of the so-called indigenous peoples? Or is the existence of the fetish only owed to the derogatory and misconstrued views of an opaque and alien ‘other’ (the ‘primitive’ people, the childish mind, the bourgeois economy, the pervert)? All texts are carefully introduced and linked to each other through commentaries by the editor, which outline major trajectories of one of the oldest fascinations of humankind – that with the seemingly meaningful objects that it surrounds itself with.