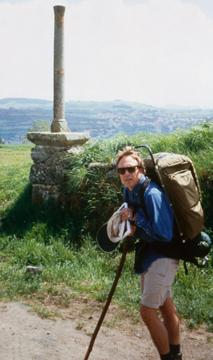 My approach to medieval art history is less one that focuses on individual paintings, sculptures, or buildings as such than one that takes into account the work of art as existing in a specifically medieval artistic culture, that is, as existing in the sub-culture of a particular social or religious group within a particular region at a particular time, in which various aspects of the work of art–such as expectations in material, craftsmanship, size, quantity, and type of subject matter–needed to be negotiated.

Toward this end, I work or have worked on such topics as medieval art as an investment, the use of art to attract donations, the equation between excessive art and holiness, art as seen in opposition to the care of the poor, art as a spiritual distraction, art as a spiritual aid, legislation on religious art, the sacred economy and art (the Cult of the Dead, which tends toward liturgical art and liturgically oriented architecture; and the Cult of Relics, which tends toward monumental art: painting, sculpture, and more publically oriented architecture), the aesthetics of holiness and the aesthetics of excess, praesentia (the sense of the presence of the holy) and the sensory saturation of the holy place, the localization of the holy, the necessity of pilgrimage art, reading and the internalization of literary analytical methods on the part of the artist, images of monstrous violence and daily life as projections of spiritual striving, building-miracles (miracles that were said to have taken place during the construction of particular churches), twelfth-century creation imagery in its political and scientific contexts, medieval maps as conveyors of a specific world-view, the use of the architectural metaphor in the medieval West, the invention of the Gothic portal, the invention of the Gothic exegetical stained-glass window, the “Augustinian sign” (as opposed to the “Pseudo-Dionysian symbol”) in the first Gothic stained-glass windows at Saint-Denis, the implications of literacy and claims to elite status in the social/spiritual hierarchy (and changes in this hierarchy caused by social changes in literacy), medieval architectural theory and the classic Cistercian plan, the historiography of Romanesque and Gothic art, and–more generally–the social theory of medieval art, the ideological use of art, monasticism and art, and art and social change.

In this, my work has challenged a number of leading theories of medieval art history, including on Pseudo-Dionysian light mysticism, Bernard of Clairvaux’s Apologia, the Cîteaux Moralia in Job, the classic Cistercian plan, and Hugh of Saint Victor’s Mystic Ark.

I have been awarded a number of fellowships and grants, including from the John Simon Guggenheim Memorial Foundation, the Getty Research Institute, the Andrew W. Mellon Foundation, the National Endowment for the Humanities (repeat), the Samuel H. Kress Foundation (repeat), and the Millard Meiss Publication Fund of the College Art Association.

Among many other activities, I am or have been a member of the board of editors of Speculum (Speculum is the journal of the Medieval Academy of America and the leading journal of medieval studies in the United States), caa.reviews (the College Art Association’s online journal of reviews), and Comitatus; and was Field Editor for Medieval Art for caa.reviews. I have acted as an invited nominator for the John D. and Catherine T. MacArthur Foundation Fellows Program and as a reviewer for the John Simon Guggenheim and Getty Grant Foundations (for a range of fellowships and grants), as well as for the other international granting agencies. I have served as a member of the International Advisory Board of the journal Art History, the Board of Advisors of Architectural Histories (the journal of EAHN, the European Architectural History Network), the Advisory Board of the series Companions to Art History (Blackwell, Oxford), and the Board of Directors of the International Center of Medieval Art (ICMA). I am an elected Fellow of the Center for the Arts, Religion, and Education, of the Graduate Theological Union, Berkeley, and the recipient at UCR of both the University Distinguished Teaching Award (an award that recognizes exceptional teaching at the undergraduate level in general) and the University Honors Faculty Mentor of the Year award (which recognizes exceptional teaching and guidance at the level of the individual student). I have served as department chair twice.

I am currently the Project Director for FACES (Faces, Art, and Computerized Evaluation Systems), a pioneering attempt to apply face recognition technology to works of portrait art, an automated version of which will be available online through UCR and through the Frick Art Reference Library of the Frick Collection in New York (funded through the National Endowment for the Humanities and the Kress Foundation).

Areas of Specialization: Medieval Art History with special interests in such topics as the social theory of medieval art, the ideological use of art, monasticism and art, the origin of Gothic art, and the art and social change.

Cultures in Conflict: Art at the Fall of the Roman Empire
Memory of Empire: The Art of Early Medieval Europe
The Medieval Pilgrimage and the Art of Romanesque France
The Gothic Cathedral in its Urban Context

Pilgrimage to the End of the World: The Road to Santiago de Compostela (Culture Trails: Adventure in Travel)
2004, University of Chicago Press
Conrad Rudolph, author

The “Things of Greater Importance”: Bernard of Clairvaux’s Apologia and the Medieval Attitude Toward Art
1990, University of Pennsylvania Press
Conrad Rudolph, author 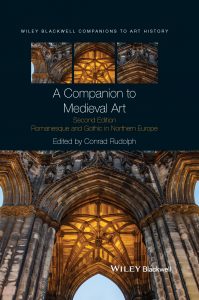 For copies of these articles, go to the following link and search the page:
https://ucriverside.academia.edu/ConradRudolph

“Medieval Architectural Theory, the Sacred Economy, and the Public Presentation of Monastic Architecture: The Classic Cistercian Plan,” Journal of the Society of Architectural Historians 78 (2019) 259-275.

Akash Gupta, Niluthpol Mithun, Conrad Rudolph, and Amit K. Roy-Chowdhury, “Deep Learning Based Identity Verification in Renaissance Portraits,” IEEE International Conference on Multimedia and Expo (ICME) 2018 (this is considered to be one of the most prestigious journals in its field) [n.p.].

Conrad Rudolph, Amit Roy-Chowdhury, Ramya Srinivasan, and Jeanette Kohl, “FACES: Faces, Art, and Computerized Evaluation Systems–A Feasibility Study of the Application of Face Recognition Technology to Works of Portrait Art,” Artibus et Historiae 75 (2017) 265-291 (FACES was conceived of by myself and I was Project Director and Principal Investigator; this article was entirely written by myself; my co-investigators authored a separate, more specifically computer science orientated piece).

“The Parabolic Discourse Window and the Canterbury Roll: Social Change and the Assertion of Elite Status at Canterbury Cathedral,” Oxford Art Journal 38 (2015) 1-19.

“Person, Time, and Place in the Construction of History in Hugh of Saint Victor’s Mystic Ark,” Romanesque and the Past: Retrospection in the Art and Architecture of Romanesque Europe, ed. John McNeill and Richard Plant (British Archaeological Association, Leeds, 2013) 265-282.

“Art and Architecture: Cistercian,” The Oxford Dictionary of the Middle Ages (Oxford University Press, Oxford, 2010) (9 typescript pages; completed and in press since 2004).

“Communal Identity and the Earliest Christian Legislation on Art: Canon 36 of the Synod of Elvira,” Perspectives for an Architecture of Solitude: Essays on Cistercians, Art and Architecture in Honour of Peter Fergusson, ed. Terryl Kinder (Brepols, Turnhout, 2004) 1-7.

“In the Beginning: Theories and Images of Creation in Northern Europe in the Twelfth Century,” Art History 22 (1999) 3-55.

“The ‘Principal Founders’ and the Early Artistic Legislation of Cîteaux,” Studies in Cistercian Art and Architecture 3, Cistercian Studies Series 89 (Kalamazoo 1987) 1-45.

For a copy on an article, go to the following link and search the page:
https://ucriverside.academia.edu/ConradRudolph